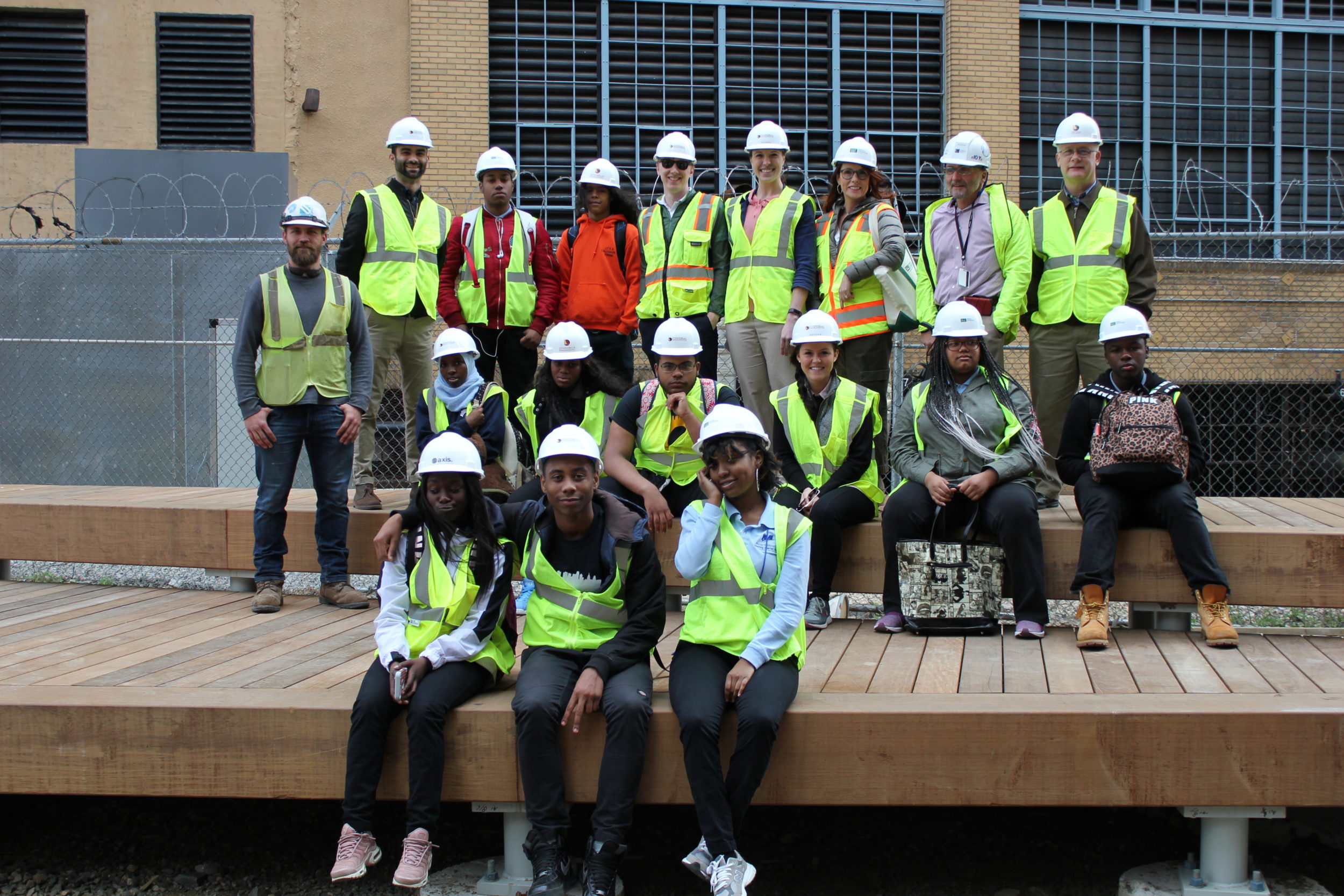 Although site visits to completed projects provide students with a wealth of knowledge, when ACE Mentor Program team leaders have the opportunity to take their students to an active job site in order to see the construction process in action, they jump on it!

Vanessa Hejnas (O’Donnell & Naccarato), Team 7’s Leader, recently learned of an opportunity to tour a portion of The Rail Park Project through her co-mentor, Jim Fratoni (Talson Solutions).  Jim put Vanessa in touch with Peter Seymour (Urban Engineers), construction manager for the project, and they collaborated to provide ACE students with an amazing experience.

Students and mentors were able to tour Phase One of Philadelphia’s Rail Park Project – a project similar to the Highline in New York City.  Phase I, the quarter mile stretch of the Rail Park between 12th & Callowhill and Broad, began construction in 2016 and is anticipated to open in June 2018.  The Rail Park Project is expected to take more than five years to complete with Phases II and III expanding the pathway to the Art Museum.  Once the three phases of construction are complete, the Rail Park will consist of three miles of green space, walkways, and bicycle pathways.

Throughout the walking tour of Phase I, Seymour discussed the construction process, pointed out unique features and elements of the park, and the vision of the completed project.  “Through Pete’s guided tour, students were able to gain a better understanding of the scope of the project – the amount of time, planning, and expense it took to get one small piece of it completed,” said Hejnas.

Her students were particularly awed by the scheduling details Seymour described, “Wood used for the tiered benches was imported from South America and required a one year lead-time. It blew their minds that some materials may require that kind of time to be ready for installation on a project.”

Another aspect of the tour which resonated with the students was the expense involved in planters for the trees.  Seymour pointed out that each granite stone costs $12 and each planter consists of 200 stones.  Hejnas explained, “Initially, students didn’t think much of these details; they thought ‘$12, that’s not too much at all.’ Then Pete did the math, and encouraged the students to multiply that by the total number of planters.  It didn’t take long before they realized the enormous expense involved in one landscaping feature.”

The most popular spot on the tour was the large, steel, swinging benches which make those sitting on them feel as though they are in the forest or on a mountain.  It’s only when they look around and see the views of the city that the full impact of the park is felt.

“The trail is designed to be jagged, uneven, and staggered as though you’re walking through the countryside.  The wood and exposed steel throughout the Park reinforces this effect,” Hejnas said.  “This experience enabled the students to understand the vision of the project, grasp the complexities of the construction process, and experience a nearly complete piece of a large project.”