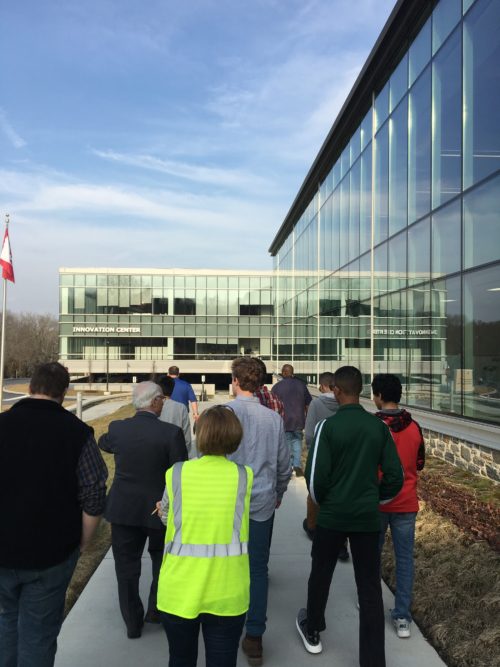 Ahhh Wawa!  The amazing store where you can get coffee, hoagies, and sometimes even gas!  We all know it, we all love it, but have we ever given any thought into why it is such a beloved institution?  Hint – it’s not an accident; careful planning goes into each and every one of those buildings with the iconic goose logo (more on that later).

Recently, Jennifer Pilgrim (Environmental, Health & Safety Manager, Skanska USA) and her East Norriton team visited the Wawa Headquarters located in the Philadelphia suburbs in Wawa, PA.  Students and mentors were able to tour the Museum (located in the original summer home of the Wood family, founders of Wawa), the Innovation & Design Center, and Test Kitchen.  Throughout the tour, guided by Terry Jacobs (project principal for Wawa’s Red Roof Campus Expansion, JacobsWyper Architects), they learned about the history of the company, how the campus has evolved over the last fifteen years, and innovations designed to ensure Wawa delivers exceptional products and service to its customers.

Wawa, Inc., a privately held company, began in 1803 as an iron foundry in New Jersey. Toward the end of the 19th Century, owner George Wood took an interest in dairy farming and the family began a small processing plant in Wawa, Pa, in 1902. The milk business was a huge success and as home delivery of milk declined in the early 1960s, Grahame Wood, George’s grandson, opened the first Wawa Food Market in 1964 as an outlet for dairy products.

Today, there are more than 750 Wawa convenience stores all displaying the iconic goose logo.  Why a goose? “Wawa” is not only the name of the land where the Wood family built their original dairy farm but it is also a Native American word for Canadian Goose.

A goose was even incorporated into the design of the main building’s lobby.  There, the team saw the stunning sculpture suspended from the ceiling.  “It is made of 702 “drops” and was carefully placed so that no structural components – such as sprinkler heads – interfered with our ability to appreciate its design,” Pilgrim said.

Over the last fifteen years, the Wawa campus has been continuously evolving and improving. JacobsWyper’s master plan for the Wawa Corporation led to the design of two new structures that significantly advance the company’s growth at its Red Roof campus.  The East Norriton team was fortunate enough to be guided through these buildings by Terry Jacobs, Project Principal for the projects.

Jennifer Pilgrim, the team’s leader, relayed how impressed she was with Jacobs’ ability to engage with the students – “The students were asking really good questions and Terry was able to answer to all aspects of the design, engineering, and construction processes, not just the architecture piece.”

As they toured Annex 5, Jacobs described how the top level of the parking garage was transformed into an open office plan supported by modern conference rooms and informal spaces for collaboration.  “As we were walking through the space, we noticed the floor sort-of followed a ramp pattern,” Pilgrim said.  “The space was completely transformed yet it retained some integral aspects of the original structure.”

The team was also able to tour the Innovation & Design Center, the new home of Wawa’s state-of-the-art Test Kitchen for food and beverages. The space is designed with a flexible cabling system to easily erect a mock-up Wawa store, engage focus groups, test equipment, and hold meetings.  Jacobs pointed out various features of the Test Kitchen’s design and explained how they relate to the layout of the Wawa stores people visit every day.

“The mock-up stores simulate how a store will be set-up and test how efficiently and effectively production will flow during the course of a day’s business,” said Pilgrim.  “The “plug-and-play” kitchen design was thoroughly thought through to allow for future innovation. We saw technology which is typically found in hospital and pharmaceutical designs.”

Pilgrim, who has taken her teams on active site visits in the past, thought it would be beneficial for students to tour a structure which has been turned over to its occupants, “It was very interesting to see the end result and to learn about how the design and construction of the structure is actually working for the client.”

From the goose to the test kitchen, the Wawa Headquarters tour enabled the East Norriton team to learn about the full scope of the design and construction process.  Students and mentors alike now have a better understanding of the thoughtfulness and intention that goes into each and every Wawa store’s layout and efficiency.  It’s no wonder why so many of us “Gottahava Wawa®!”