2019 Outstanding Mentor of the Year 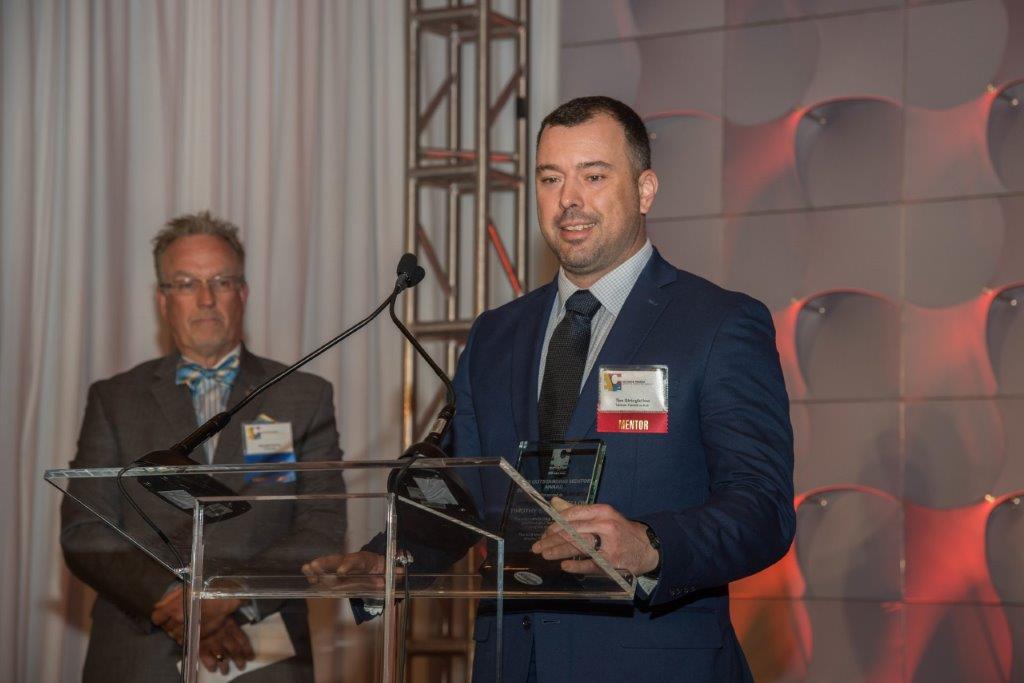 “I love that this program is able to help students get a glimpse into the A/C/E industries and assist with their decisions around post-secondary education.  I can only hope my role in their success has been to keep the spark going for what they dream to be.”

Choosing Timothy Stringfellow as 2019’s Outstanding Mentor of the Year for ACE Greater Philadelphia was not a difficult decision.  He possesses a very strong and supportive spirit that allows him to excel in any task that he is given, consistently serves as a role model for the students on his team, and imparts his passion for his chosen profession to the next generation.

In 2012, when senior leadership in Torcon’s Philadelphia office sent out an email to encourage younger employees to become involved in programs such as the ACE Mentor Program, Tim Stringfellow’s interest was piqued.  Without hesitation, he signed up to become a mentor and quickly discovered the impact the ACE Mentor Program has on its students and mentors.

The following year, Stringfellow was recommended as a team leader and enthusiastically agreed to take on the role.  “Since taking over that position, I have come across so many wonderful students, school champions, internship coordinators, and other mentors.  All of these people, past and present, inspire me to give my all in hopes of getting the best out of the students and other mentors on the team,” relayed Stringfellow.

Stringfellow’s drive has had a tremendous impact on ACE Greater Philadelphia’s program and has earned the respect of his students, team members, colleagues, and community through his dedication, teaching style, and passion.  The professional connections he has acquired through the years enable his students to gain practical knowledge about all aspects of the construction industry.

“Shortly after Tim joined our company, we recognized he was an ideal person to be involved in ACE.  Throughout his time as a mentor, Tim has successfully built relationships with peers and students, pushing them to embrace challenge and celebrating their successes,” said Amy Novak, Project Executive with Torcon.

“Over the last six years, Tim, as a Team Leader, has accepted each and every challenge we have posed to him and has always accepted with an overwhelming eagerness to participate and collaborate,” explains Tiffany Millner, Executive Director.  “Although he manages a full schedule, both professionally and as a volunteer, he still manages to attend all ACE sessions, bringing enthusiasm and the keen ability to encourage students to use their imagination and seek out potential opportunities.”

In addition to leading team sessions in a professional setting, Stringfellow has been instrumental

in engaging the students in real-world experiences that highlight the career aspects associated with the field of construction management. These experiences include job-site tours to professional projects such as Villanova University where students were able witness all aspects of the construction process.

“During our recent field trip, Tim did a fantastic job describing his day-to-day profession as a project manager and provided students with insight on his career,” shared Lorena Alvarado (Schneider Electric).

Stringfellow’s love of the design and construction industry paired with his passion for mentoring high school students is apparent to all who come in contact with him.  Michael Devuono (Arcadis) who has mentored with Stringfellow since 2017, describes his impact, “Timothy has proven to be a point of inspiration for the students. He has touched the lives of hundreds of students, and has helped them pursue careers in the Architecture, Construction, and Engineering fields.”

Alvarado, who has mentored with Stringfellow for three years agrees, “Tim is great at what he does – his talent at teaching simple and advanced topics are superior and he has a great ability to establish a rapport and connect with students. He inspires them to reach their full potential by guiding them toward a future in the construction industry. His passion for his career is reflected throughout each session and has proved to be motivational for the students.”

Although Stringfellow, admits to being humbled and honored by the recognition as 2019’s ACE Greater Philadelphia Outstanding Mentor of the Year, his passion and enthusiasm for working with ACE students is clearly what drives him to return to the program year after year.

“I have been fortunate over the years to come in contact with some pretty special students that have excelled within the program as well as continued on to great success outside of the program,” Stringfellow exclaims.  “One such student I was fortunate to have for 3 years in a row. He was accepted to a University that focused on science and technology and is in the STEM Honors program now.”

“Another returning student has had an impact on me and how I approach being a Team Leader.  When I met him, he stood up in front of a room of students he had never met and declared his desire to be a Mechanical engineer. He also opened up about his disability.  To see him put himself out there, keep plugging away at his dream, and show up to each meeting eager to learn and participate was very inspiring.”  Stringfellow proudly continued, “This year at our last meeting, he came in smiling ear to ear so happy to say that he was accepted to Drexel University for Engineering.  He had worked hard at his goal and is now on his way to making his dream come true!”