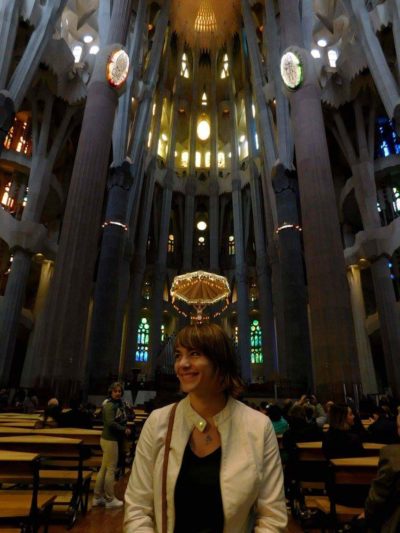 Breanna Sheeler came to the ACE Mentor Program in her senior year of high school.  This normally would not be all that unusual except that the program was not offered at Boyertown Area Senior High, the school she attended.

Through Boyertown’s Technology Student Association (TSA), part of the District’s STEM program, Sheeler was able to work on a hobby she enjoyed – architectural based projects.  Her flair for architecture did not go unnoticed by her teacher who suggested Sheeler should pursue a career as an Architect.

Feeling encouraged but having tapped out the resources at her school, Breanna turned to her mother, a teacher at Pottsgrove High School, for advice.  Fortunately, Sheeler’s mother immediately thought of the ACE Mentor Program and encouraged her daughter to join the Pottsgrove team.  Sheeler did and her path was forged.

Breanna’s experience at with the Pottsgrove ACE Team was so enjoyable and her interaction with one of the mentors, Jennifer Pilgrim (Skanska), so positive that she decided to also join the East Norriton ACE Team.

“At Pottsgrove we worked through a workshop structure where each week we would learn about a different A/C/E discipline.  At East Norriton, we were a project-based team and worked through a Habitat for Humanity based challenge,” Sheeler recalled.  “Through these experiences, my mentors helped me to understand that Architecture or Engineering would be my way forward.”

“During my time in ACE, Jen Pilgrim became more than a mentor to me — she wrote me a recommendation letter for her alma mater, Philadelphia University, and for the ACE Scholarship.  Ultimately, I was accepted into the University and won the scholarship,” Sheeler mentioned.

Sheeler toured Jefferson’s campus, had lunch with Barbara Klinkhammer (ACE Advisory Council Member), Dean of the College of Architecture and the Built Environment, and knew the University was the right place for her to pursue her degree.

“I felt comfortable on campus, liked the support I would receive, and enjoyed the personal investment Jefferson makes to its students,” Sheeler said.  “I enrolled and began taking courses in the Fall of 2014 and what I discovered was that Jefferson as a community is collaborative, supportive – students feel as though they’re in it together.”

One valuable resource Sheeler found to be missing was the ACE Mentor Program.  Not one to sit idly by, Sheeler took it upon herself – as a Freshman – to establish the first collegiate chapter within the ACE National network. Creating this chapter provided all-important professional development opportunities to the Jefferson students enrolled in design and construction related degree programs.

“I spoke with Barbara [Klinkhammer] who was just beginning to get involved with ACE, about bringing the program to Jefferson.  She supported the idea so I connected with upper classmen and formed the first collegiate chapter of ACE,” Sheeler exclaimed.

The program helps students develop and prepare professionally through workshops, lectures, and career exploration.  “We have established leadership with a strong membership and structure programming around what we wish to know and what seasoned professionals can teach us about their experiences,” Sheeler said.

As she progressed through her degree program, she continued to develop a growing interest in teaching others about her journey and how they too could find their path.  She pitched the idea of forming a new high school ACE Team within the Greater Philadelphia Affiliate to her colleagues at DesignBlendz, the firm where she was interning.  “We were having a conversation about social outreach and philanthropy.  I approached them with the idea of forming an ACE team which could be a collaboration between DesignBlendz and Jefferson.  I offered to take on the role of Team Leader with the support and shared responsibility of their resources,” explained Sheeler.

The initiative was given the go-ahead and Team Jefferson was formed.  The project-based team consists of mentors from DesignBlendz and Jefferson University who work to introduce High School students from Mastery Charter High School’s Picket Campus to various A/C/E disciplines, design concepts, and aspects of the industry.  Industry professionals talk with the students about their personal experiences and college students and faculty members speak the high schoolers about what they can expect once they arrive on campus.

“Ideally, we want to help bridge the students from High School to Jefferson University to a professional firm such as DesignBlendz,” said Sheeler.  “The partnership with DesignBlendz has been invaluable for our ACE team – students are able to use online resources, develop concept designs, create student-designed schematics, and make models.  They have access to a 3D printer and Virtual Reality technology for visualization!”

Sheeler, who was recently appointed to the ACE Board of Directors as the Alumni Co-

Chair, has an impressive resume which expands well beyond the ACE Mentor Program; she is a Senior Member on the Dean’s Student Advisory Council at Jefferson, the Founder and Champion for the TSA Involvement Venture at Jefferson, and Chief Publication Editor of the CABE annual student journal SPACEWORK.  Her plans for the future?

“I want to stay in Philadelphia and find work where I can oversee teams and manage projects.  I love pulling everything together through collaboration with clients and colleagues, engaging with the community, and organizing the big picture.  There’s a lot of skill involved in that type of work and I recognize the value I hold in those skills.”