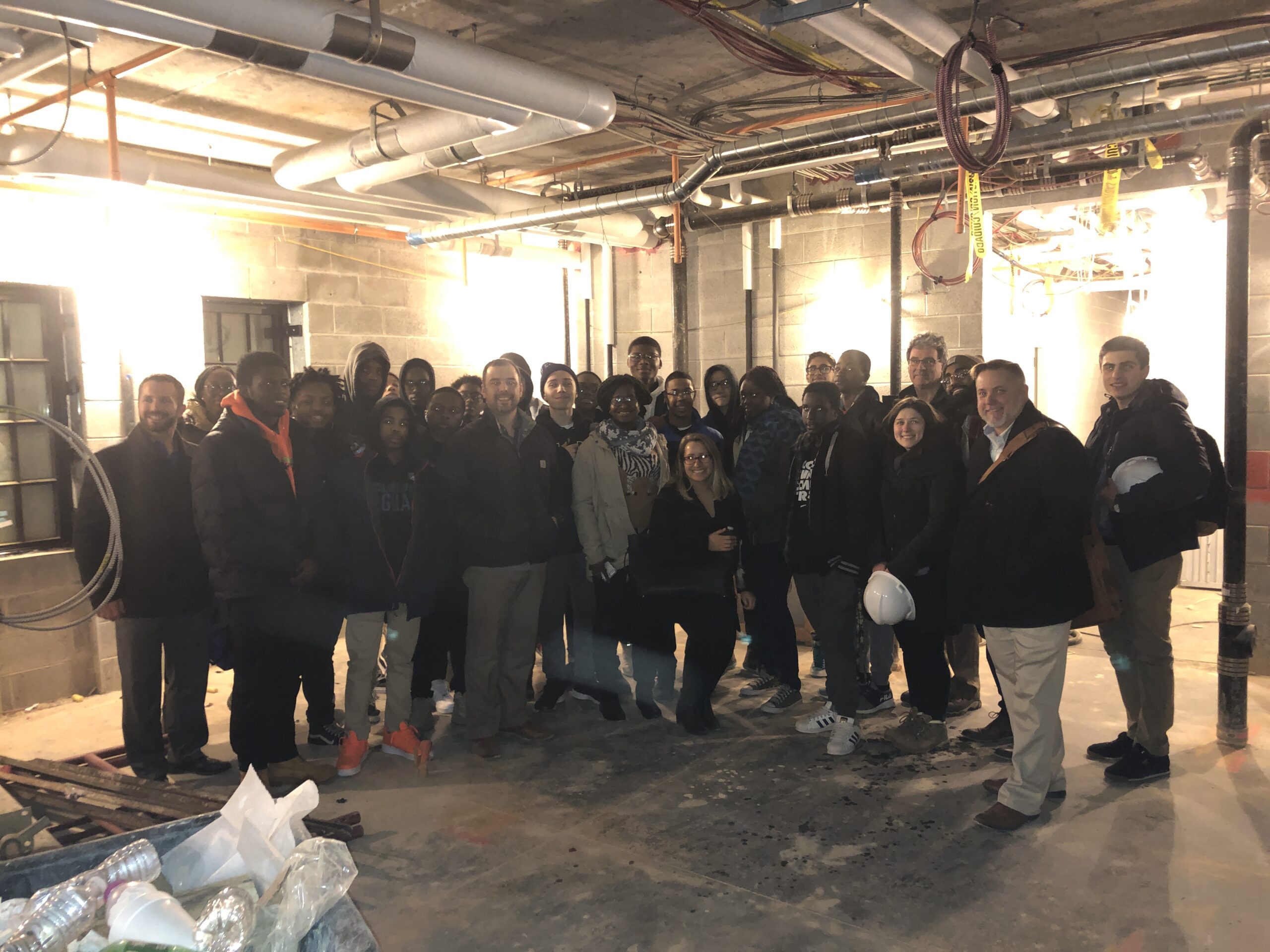 Two Philadelphia teams – Team 4 led by Tim Stringfellow (Torcon) and Team 6 led by Tom Saldutti (JMT) – recently got a sneak peek at Villanova’s massive student housing project.  Stringfellow, the project’s manager, provided an extensive tour during which he discussed the construction process, highlighted features and challenges of the project, and provided ACE students with insight into how his career has progressed over the last twenty years.

The tour encompassed all aspects of the construction cycle and included areas which are in a state of being nearly fully complete and others which are still being framed out. The three phase project, which began as a solution for the lack of student housing for Villanova’s upperclassmen, must be completed by June 1, 2019.

Stringfellow explained to the group that Phase 1, a 300 space parking lot, and Phase 2, a 400,000 square foot, 1,298 space parking garage, began simultaneously 2016. By starting Phases 1 and 2 simultaneously, the project team was able to save time in its rigorous schedule and begin construction in April of 2017 on Phase 3, the 440,000 square foot student housing project.

Located along Route 30, the main thoroughfare through Villanova’s campus, the massive housing project consists of 6 buildings, containing 400 living units for 1,300 students.  Once complete, the complex will also include classroom space and retail locations for a gym, yoga studio, genius bar, and restaurant.

Each housing suite features a kitchen, living area, one to four bedrooms, and bathroom facilities.  The main buildings also have common areas, sitting areas, and communal kitchens.  Thirteen elevators will help to transport students throughout the building.  The project includes fifty handicapped accessible rooms although all rooms are capable of transition to meeting ADA requirements if needed.

Featuring the single largest masonry contract ever awarded in Local 1’s history, $25 million in stone and masonry, the façade of the structure features brick, block, and stone local to Kennett Square quarries.  Hundreds of stone masons worked to sort, shape, cut, blend, and place individual stones in place to create a uniform look on the building.  This process began in January 2018 and one year later, the time consuming, extraordinarily intricate work is nearly complete.

“Stone masonry is a lost art.  In my twenty plus years of experience, I have never seen a project like this and probably never will again,” Stringfellow told the ACE students.

In addition to the description of the construction process and multiple schedules necessary to keep such an undertaking on time and within budget, Stringfellow also discussed obstacles the project engineers have faced during construction.  “There are no right angles or column lines in this project.  The building’s exterior follows the slight curve of Route 30, which doesn’t allow for right angles to exist.  To further complicate the construction, there are planks which are not flat or level, making it difficult for construction tolerances like door heights and plumbing to be uniform,” explained Stringfellow.

Rounding out the evening’s tour, Stringfellow talked to the ACE students about the path he took to becoming the Project Manager of the Villanova project.  “After an interesting early career with many redirections, I graduated from Drexel’s construction management program.”

“One of my professors there connected me to Torcon where I was hired seven years ago,” Stringfellow explained.  “I’ve been promoted twice and now am the project manager for this site. There is not one ‘right’ way to becoming a project manager.  I’ve seen people from many different fields join this profession – the opportunities are there as long as you are willing to show up and be dedicated.”