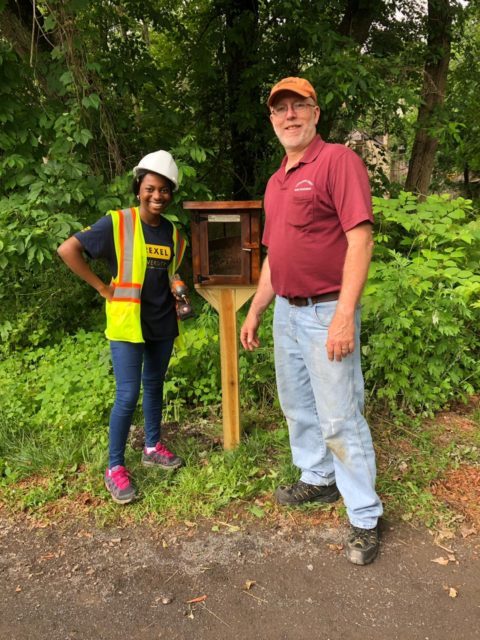 “I decided to try something new and different and stretch myself beyond an internship or volunteering,” explained Brown.  “Senior Capstone is a graduation requirement and my goal was to make a lasting impact on the community.  I felt as though the best way to do this was to install Little Free Libraries.”

Little Free Library is a nonprofit organization that inspires a love of reading, builds community, and sparks creativity by fostering neighborhood book exchanges around the world working on a “take a book, return a book” free book exchange model. The libraries come in many shapes and sizes, but the most common version is a small wooden box of books.  There are more than 80,000 registered Little Free Library book-sharing boxes in 91 countries worldwide.

“After conducting some research for the capstone project, my mom and I discovered that there was only one Little Free Library locally.  We thought it would be a good idea to offer more and we began to learn more about how we could accomplish this goal,” said Brown.

With her sights set on installing five library boxes throughout her community, Brown developed an extensive project plan and began discussions with others around how she could obtain funding, materials, and locations for her libraries.

“Tiffany Millner, ACE Greater Philadelphia’s Executive Director and a former mentor of mine, directed me to Angela Hendrix of the GBCA who, after hearing about my plan, generously donated $300 for the cost of two library boxes,” shared Brown.

After receiving this funding and readjusting her goal from five library boxes to two, Brown then began to organize the next steps which required obtaining permission for installation of the boxes on public property.

The two locations on which they settled were at the Byberry Road Entrance to the Pennypack Trail and at the Bryn Athyn Post Office.  “Both of these locations are frequented by community members so we felt as though they were the ideal spots for people to exchange books,” Brown described.

Once the locations were chosen, and the boxes arrived from the Little Free Library, installation began.  “The boxes arrived intact but we needed to stain and install a post so that the boxes are elevated to about eye level,” explained Brown.  “My mom, Angelita; Scott Morgan from Parks and Rec; and I worked together on the construction and installation.  Through this process, I developed a better understanding of skills required across the A/C/E fields.  I learned a great deal about working with cement, power tools, the engineering required to install the post into cement, and the importance of using pressure treated wood for outdoor applications.”

As a part of Brown’s well-organized project plan, she needed to acquire books to place inside the boxes.  “The Immanuel Lutheran School closed and we were able to receive a book donation from their library,” Brown said.

The two Little Free Libraries were opened in June, 2019.  Brown’s family and friends were invited to the grand opening where the boxes were ceremoniously filled with books.  “I am hopeful that word of mouth will spread and people will begin to make use of the little libraries,” Brown stated.  “I envision community members finding new books to read on their way to exploring the Pennypack Trails or placing books they’ve already enjoyed in the box on their way to the post office.”

Brown, who graduated from Abington Friends School in early June, presented an overview of her project at the school’s Capstone Night where she was required to explain her endeavor and discuss what she learned through the process.

Brown will be studying Architecture at Drexel University in Philadelphia in the Fall.  She was the recipient of the Commercial Real Estate Women Philadelphia (CREW) Scholarship presented at ACE Mentor Program of Greater Philadelphia’s Scholarship Breakfast as well as the Diversity Advancement Scholarship given by the American Institute of Architects (AIA).